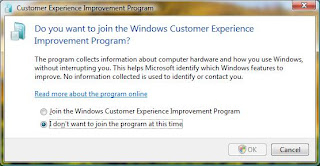 So this is another annoying Microsoft thing with Vista - They ask you if you want to share usage information with Microsoft on your computer usage and other stuff. But the OK button is disabled.. So in order to say No, I have to first say Yes and then say No to enable the OK button... then you hit OK and have to elevate the decision to the system administrator to allow and confirm that you really didn't want to join.

I had to decline this "great offer" once when installing Vista, and now again after installing Service Pack 1. Not only is it hard to say "No" but you have to say it multiple times - awesome...
Posted by Alex Talarico at 9:57 AM No comments:

Excel as a 3D Graphics Engine

Read the full article here.
Posted by Alex Talarico at 11:02 AM No comments: 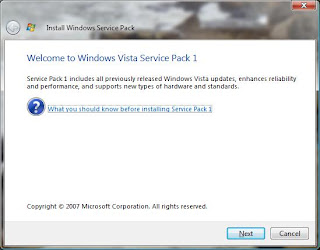 I decided to install SP1 today after a frustrating couple days dealing with Vista issues I'm told are resolved in the latest Service Pack.. The most frustrating of all being how slow "File Copy" operations are in Vista.. I was copying files both on my own computer hard drive and across the network - both ridiculously slow in Vista.

Later in the day I gave a demo presentation and ran into a few issues with Vista's "smart" projector output sensing.. which I read was worked on in SP1.


SP1 should be out on Windows Update later this month.. I was going to hold off and go that route.. but since I have it available I figured why not.. ideally SP1 will solve the problems I've been dealing with.. worst case scenario I'll install ubuntu until Vienna comes out.
Posted by Alex Talarico at 10:01 AM No comments:

What I'm listening to...