Europe is a country ... and they speak french there.

There's a few credit cards I hardly ever use so I don't even carry them with me. I decided today to redeem any points and close them...

I call the service center and they ask me for the account number. The conversation went something like this -

... so, as you can see they have great security measures in place at compass bank as well.
Posted by Alex Talarico at 11:37 AM No comments: 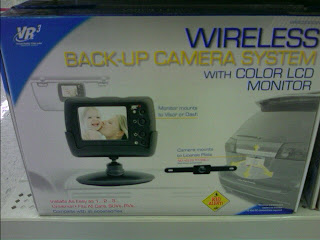 Imagine how flat out awkward and confusing it would be if you were backing up your car one morning when all of a sudden you see a young mother kissing her baby as illustrated above...
what were they thinking!? *

* My best guess is the graphic designer in charge of the box didn't bother reading and figured this was going to be a digital camera..
Posted by Alex Talarico at 2:39 PM No comments:

No Passengers Allowed in the Turbine. Thank you. 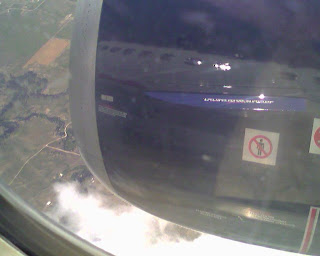 Is this warning really necessary?
Posted by Alex Talarico at 10:34 PM 2 comments:

Windows at the Wynn 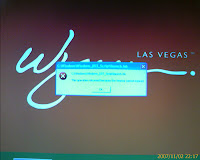 Windows errors are following me around...

I walked up to an information booth at the Wynn. I touch the screen and get greeted by a script runtime error.
Posted by Alex Talarico at 8:52 PM 1 comment:

aptera to toyota: all your base are belong to us

I recently read that aptera is taking preorders for their new electric cars... if you never heard of an aptera car it's cause there arent any yet :)

This car looks beyond futuristic, it looks plain odd. The company expects to have it out on the streets by the end of 2008.

They range in price from 26k to 30k.. that's about the price of a prius and this ride gets you up to 300 miles per gallon, or two hours on electric only models. wow.

I just wanted to get the word out since most people I know probably never heard of this upcoming car company..
Posted by Alex Talarico at 12:11 AM No comments:

I wonder what happened here.. 1) I was running a lot of things at once
2) I opened internet explorer
3) I hit the maximize button
4) I stare at a black screen and this insanely over-sized window bar..

I haven't posted in a while so I figured I'd take a screenshot and take 5 minutes off to rant about some of the weird "added features" windows vista offers on slower machines..
Posted by Alex Talarico at 12:41 AM No comments:

... this morning I hear the sound of the office lady filling up her candy bowl with m&m's ... she has a big bag, in fact a whole drawer full of candy. But she selectively puts it out in small rations..

...and then it hit me: she is feeding her coworkers as you would pigeons in the park.
Posted by Alex Talarico at 8:04 AM 2 comments: 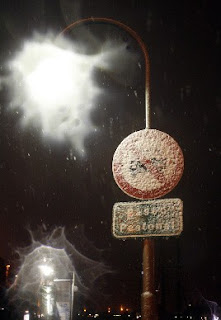 Flying on southwest implies open seating.. to gain some control of the passengers, southwest assigns "groups" based on the time you checked in - Groups A, B, and C.

Typically I'm running late and always end up in Group C ... this translates to being stuck in the middle of two stank large individuals, not having overhead bins to put my luggage in, among other such unpleasant experiences...

So I thought I'd try something new.

The pictures illustrate my maneuver - just remember: lay low and time it right. When the ticket agent is looking down is a perfect chance to blend into Group C and start boarding.

Bon voyage!
Posted by Alex Talarico at 8:10 AM No comments:

"An unhandled exception occurred in the user interface" ... wow. 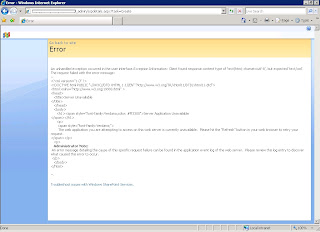 I've worked a lot with MOSS (SharePoint 2007 Server) the past few months and... a routine task gave me this error. I had to screenshot it and post it. This one was just.. special. No doubt.
Posted by Alex Talarico at 11:16 PM 2 comments:

I logged out and typed my password incorrectly on purpose just to make sure, and it worked.. I was in...

Apparently I discovered that Wells Fargo ignores what you type on the password field after there is a match... So if my password was "secret" and I typed "secret4u" i still get authenticated and get access to my account!!! Try it out for yourselves and have a laugh.. Then get worried some... then call/email and complain.. then switch banks.
Posted by Alex Talarico at 4:37 PM 1 comment:

guy on right supposedly throwing paperclips.. likely staged but pretty funny to see :)
Posted by Alex Talarico at 10:57 AM 1 comment:

Now, I just realized I posted nothing productive - just a whiny complaint - so i'll stop.
Anyway, on a positive note I can always email Richard Simmons* for help and guidance..

*User takes all risk and responsibility for opening the link. Link may contain one of the creepiest videos ever recorded. May cause irreversible brain damage.
Posted by Alex Talarico at 5:23 PM 1 comment: 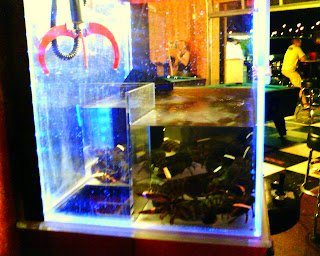 I story was told of a bar in scottsdale.. A bar that had a new take on the classic claw prize game. Delightfully disturbing. What would you do if you won this time?
Posted by Alex Talarico at 9:53 PM 2 comments:

Listen to my playlist

I added a playlist to my site... it comes in handy for when I dont have any music around, you can get to it by clicking on the headphones icon on the top right from my homepage ... enjoy!
Posted by Alex Talarico at 6:32 PM No comments:

Just another gripe, after running on windows Vista for nearly four months now..

I keep running into the most annoying problems:

The UAC model where color coded messages pop up and warn you about what you just told windows you want to do makes it frustrating to install, uninstall, delete, move, copy, change a setting, use your computer period. A lot of major software publishers dont have much of an excuse. Everyone's had access to stable betas for about a year, and the final version was released in November.. Drivers and new software should be here by now you'd think...

The more I deal with this, the more I think Vista was named after an internal acronym for: Very Intrusive System That's Annoying.

I'm pretty tired of those wow commercials, so far the 'wow' has been about stuff not working or system crashes (drivers again).. maybe by mid 2007?
Posted by Alex Talarico at 9:32 AM 1 comment:

baja 'not so' fresh 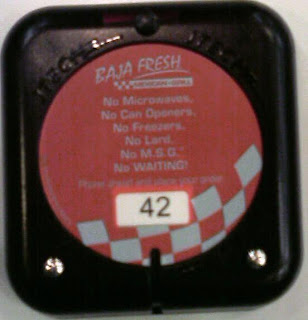 So there I was, holding this thing 'waiting' for my food... when i read it. The 'waiting device' says -

No 'Walking After Items .. eh i'm done, it's not an acronym.. It is just stupid.

The heart of the question here is... was it coincidence that I got number 42?
Posted by Alex Talarico at 10:46 PM No comments:

What I'm listening to...